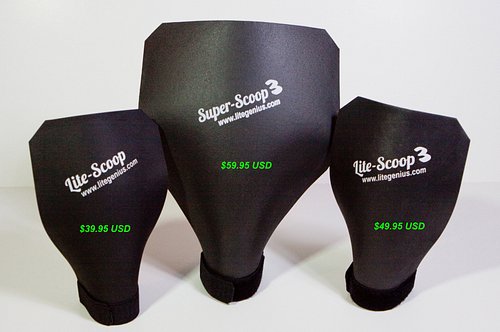 To give photographers a little more finesse and control, ISO shutter speed and aperture is actually broken down further into 1/3 stop increments. So you can adjust your camera (and some flashes) in 1/3 stop increments. But 1/3 of a stop change in ISO is the same as a 1/3 stop change in aperture or shutter speed. Those 1/3 stop changes happen with single clicks on your scroll wheel. So sometimes you’ll hear other photographers say things like “adjust your exposure up a click or two,” meaning increase your exposure by 1/3 or 2/3s of a stop.

I find counting clicks to be helpful if when I’m trying to change settings on the fly.  If I open up my aperture to change my depth of field but don’t want to change the overall exposure, I simply count clicks as I roll my wheel.  A three-click change in aperture can be compensated quickly by three clicks in shutter speed to let that light back in.

Have you ever had another photographer tell you to stop down? That’s his way of telling you close down, or narrow your aperture so that less light is coming in. Some photographers use the term stopping down to mean letting in less light generally, but it’s usually in reference to your aperture.

by one stop mean?

You might have also heard someone say they intentionally overexpose by a stop. That means they are intentionally making their scene brighter than what the light meter recommends. If you are underexposed by a stop, it means your image is darker than it should be.

What is a T stop?

A T stop is most often used in videography.  It’s the f-stop value from the lens combined with the light transmission value of the lens.  It’s not really important in photography, but if you start getting into photography, you’ll hear the term used frequently.  T stop values allow videograpers to ensure complete consistency in exposure between cameras and lenses and from shot to shot.

A Stop of Light -

Now look at your histogram in your camera (or in Lightroom for that matter!) You’ll see a series of vertical bars evenly spaced across your histogram. Each of those bars represents a stop of light!

Learn how and why to use your histogram.  You’ll love it!

Flashes also use stops of light! Your flash power is expressed as a fraction. If your flash is on full power, the display on your screen will read 1/1. If you turn it down to ½ power, you’ve reduced the light by half. And what’s a halving of light? A stop! Conversely, if you start with your flash at 1/64 power and increase your power to 1/32, you’ve doubled your flash power, or light, in your scene. A doubling of is what again? A stop!

Why is this important? There are times where you’ll want to add flash to your scene but need to adjust the settings to create the image you want. For example, you have your settings set to f/4, 1/160, ISO 100 and your flash power is set at 1/8 power. You like the exposure (and it’s a correct exposure as measured by your gray card) but you want to widen your aperture to get a more shallow depth of field. If you change the aperture by two stops to f/2, you could add more light into your scene by raising your flash power two stops to ½ power.

What is a stop of light

A stop of light is to photography what a cup of flour is to a bakery. Learn what it means and why understanding it makes you a better photographer.

The three fundamental elements of any image, aperture, shutter speed and ISO, are all based on, or measure, in stops of light.

Numerically, each is expressed differently. But those numbers (f/2.8, 1/100 or ISO 100) are ALL based on stops. And changing your settings by a stop of light results in doubling or halving of the light in your scene, right?

Let’s look at the graphic below you’ll see how this doubling/halving idea is also represented numerically. Start at the bottom with ISO. Do you notice as you move from left to right, the numbers double in size? That’s because moving from ISO 100 to ISO 200 is adding a full stop of light to your scene! If you move from right to left, moving from ISO 500 to ISO 250 for example, the number to the left is half the size of the one before it. And what is half the amount of light? A stop!

Now move up to shutter speed. (Just remember as we talk about this, we’re talking about fractions of a second…if you remember your elementary school math, as the bottom number gets bigger, the entire fraction gets smaller). We start at 1/30 of a second and move to 1/60 of a second. Remembering that fraction math, 1/30 is twice as big, or double, 1/60. And what is a doubling of light? A stop!

Aperture, or the size of the opening of the hole in the lens, is expressed as an f-stop.

An f-stop is not the same as a stop of light.  An f-stop is just another way of saying the size of the aperture.  F-stops relate to true stops of light, but they aren’t the same thing, exactly.

We use numbers like f/1.8, f/2, f/16. These numbers come from an equation. (You don’t need to know it, but if you’re a science nerd, it’s F-stop=Lens focal length ÷ diameter of the aperture size.) So the number expressed in the f-stop designation isn’t doubling of halving, but the size of the opening is!

This was the part that always threw me. I wanted f/8 to have twice as much light as f/16 because that would make it so much easier! But one stop more of light than f/16 is actually f/11.

If you want to memorize anything about all of this stop business, memorize the chart of full increments of light. Starting at f/1.4, full stops are as follows:

If you know those numbers and understand how they represent stops, you can correlate them to stops in ISO and shutter speed or flash power.

Putting it all together

Here’s another example. I take a test shot and like how the light looks at f/2.8, 1/500 and ISO 400. But I’m shooting a group of nine people in three rows and want to have a greater depth of field so I decide to use an aperture of f/8 to get everyone in focus. How many stops of light have I lost? Three full stops. So to gain add three full stops of light back into the scene, what could I do?

Any of these answers will get you the same exposure, or brightness, as you had before. But which is right? It depends on your camera and your preferences! But any of those answers gets you three stops of light back into your scene. And you can make all those decisions without looking at your light meter after your initial metering.